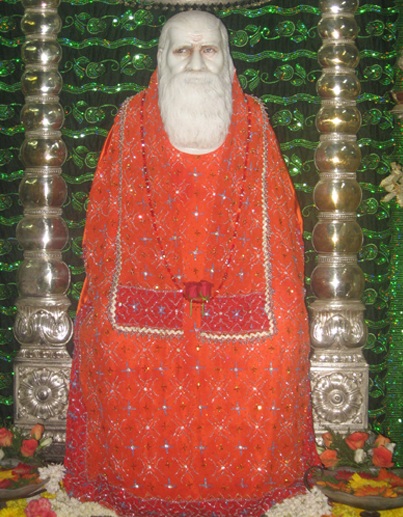 From times immemorial, the soil of our sacred, sweet and sun-lit Sind has been sanctified by men of light and learning, saints and sages, fakirs anddervishes, poets and prophets, and scholars and singers. The sacred river Sindhu, on the banks of which, the rishis of yore devoted their time to compose the Vedas, and chanting mantras, flows through Sind. Its waters, as they flow placidly and smoothly, murmur the message of the ages, the message of the sages, the messageof Shanti-Shakti, peace and strength. No wonder, the Hindus and Muslims in the province of Sind were united in a bond of brotherhood. They mixed and mingled freely and lived like true neighbours. They beheld the One Light shining in all. “God is One! Ishwar and Allah are but different names of the Multi-named One!” they declared. They sought the blessings of one another and gave love to one and all, irrespective of caste and creed, race and religion.

During the last four centuries, Shah Latif and Sa’ami, Sachal and Rohal, Beydil and Bekas, SainParu Shah and Vasan Shah, Bhagat Kanwarram and Bachal Shah, Rishi Dayaram and Sadhu Vaswani, Swami Lila Shah and Shahenshah Baba Nebhraj took birth in our immortal Sindhu Desa. Like all holy beings, Shahenshah Baba Nebhraj has served as a source of help and healing, inspiration and guidance to those treading the spiritual path and longing to become one with the One. He has been a light to those stumbling and struggling along the steep, stony, rough, rugged and darkened path of life. He has extended his support to those wading through the sea of despair, drawing them out of its depths and leading them safe to the shore. He has served as a staff to those groping in the wilderness of this world, providing comfort and consolation to them. His devotees, scattered far and wide, have rightly called him ‘Shahenshah’ i.e. ‘Emperor’. Shahenshah Baba Nebhraj was, indeed, more than an emperor. For while the coffers of a worldly emperor are likely to be exhausted, the spiritual treasure that Shahenshah Baba Nebhraj gathered, far from being emptied, keeps multiplying with the passage of time.

Shahenshah Baba Nebhraj lived truly like a typical Sufi saint of Sind. Poor in the wealth of the world, he was rich in spiritual treasure. He moved about clad in a single long, flowing robe, carefree and fearless, absorbed in the thoughts of the King of kings, with a far-away gaze in his eyes. He had a stately bearing and moved nonchalantly, caring the least for things temporal. Rich and royal is the heritage of each human being but not many become aware of it. They live and move as beggars, knocking from door to door, begging from street to street and crying from one corner to another. Shahenshah Baba Nebhraj had come to this world to wake men from their slumber of the senses, to extricate them out of their dens and dungeons of ignorance and ambition, selfishness and restlessness and to lead them to the Abode of God, where dwells bliss untold. 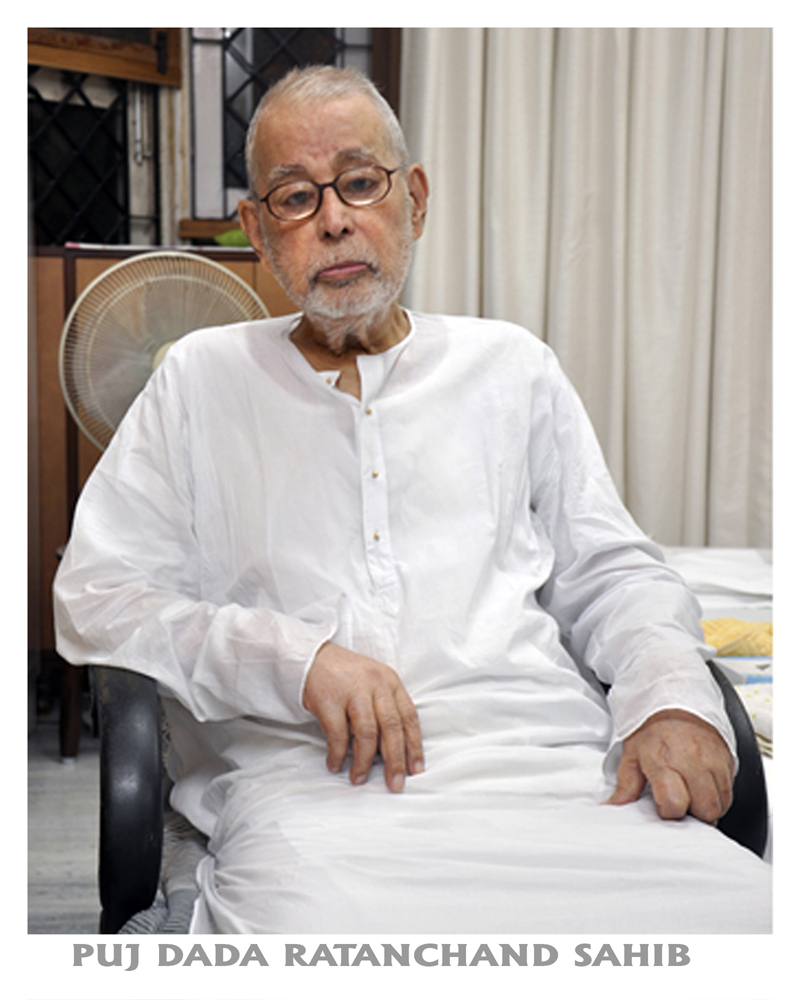 Puj Dada Ratanchand Sahib, the founder-father of Sufi Dar, was born on 4 November 1926 to Rukmini Devi and Bhai Pessumal Dodani in Hyderabad, Sindh. For five years the parents were not blessed with children. Dadaji’s maternal grandfather, Bhai Hemandas Chatlani, a pious soul, used to visit Sain Qutub Ali Shah Badshah regularly. One day, he placed his turban (as a mark of respect and humility) at the feet of Badshah Sain and humbly prayed for his daughter, Rukmini Devi, to be blessed with a son. Badshah Sain felt so pleased to hear the plea and petition of his dear devotee that he said: “I will send one of my own”. Soon Rukmini Devi gave birth to a son who was named Ratan. Sadly, Rukmini Devi passed away when Dadaji was only two years old. His grandfather, Bhai Hemandas, took charge of Dadaji. As a result, Dadaji was surrounded by the wisdom and spirituality of saints from His childhood and their company shaped his life.

Behind Dadaji’s home in Hyderabad stood the temple of “Yaari-Wara-Peer” (a very powerful saint). Before going to school each morning, Dadaji used to sweep and wash the temple premises. Unlike his companions, Dadaji preferred to spend his time in the company of saints and dervishes.

Dadaji began working in 1945 at a textiles company, M/s. Kishinchand Chellaram, in Mumbai. He was subsequently transferred to the company’s branches in Benaras, Jaipur and Delhi. In 1953, he joined another textiles company, Vensimal Kalachand, in Delhi. Here too, he was sent from one branch to another, from Delhi to Mumbai and Calcutta and finally Chennai where he was asked to establish a new branch. It was in 1988 that Dadaji retired.

In 1953, during the period that Dadaji was in Delhi, he met Pujniya Baba Gopaldas Sahib (Talib) at Darvesh Asthan, Majnu-ka-Tilla where the sacred Samadhi of Puj Shahenshah Baba Nebhraj Sahib stands. He became a regular devotee to the Darvesh Asthan. Baba Gopaldas Sahib (Talib), pleased by his devotion, would ask him to meditate in the ghufa (cave like entrance to Baba Shahenshah’s samadhi at Darvesh Asthan), especially on Saturday nights. Dadaji was later transferred to Calcutta where he established a small temple which still exists and bears the name “Dukh Bhanjan Darbar” (an abode which removes all sorrows).

Sufi Dar Trust was established under Dadaji’s inspiration and able guidance as a humble dedication to Puj Shahenshah Baba Nebhraj Sahib. First, he set up a small temple on Waltax Road, Chennai, where 30 to 40 devotees would regularly join the fellowship gatherings. As the congregation of devotees grew, Dadaji shifted the temple to its present site in Mylapore, Chennai.

Sufi Dar has also become a centre of service for the impoverished, the needy and the distressed. Dadaji was a source of inspiration to the devotees and served them as a friend, philosopher, guide, and above all, a master and guru.

Dadaji’s compassion was not restricted only to human beings. It included defenseless creatures, birds and animals which in his view were also a part of God’s creation. Today, this teaching has inculcated similar feelings among the devotees and sevadaars who regularly feed animals as part of the rituals conducted by Sufi Dar.

From a family perspective, Dadaji was a father of six children – two sons and four daughters. According to the teachings of the Gita, he discharged his worldly duties and devoted his time and attention to Sufi Dar.

Puj Dadaji, the pious crusader of love and divinity, merged with the Lord on 25 November 2013.

He will continue to shower his blessings on us all.

Sufidar is a religious home to every visitor, irrespective of his faith, is sure to behold his favorite deity. 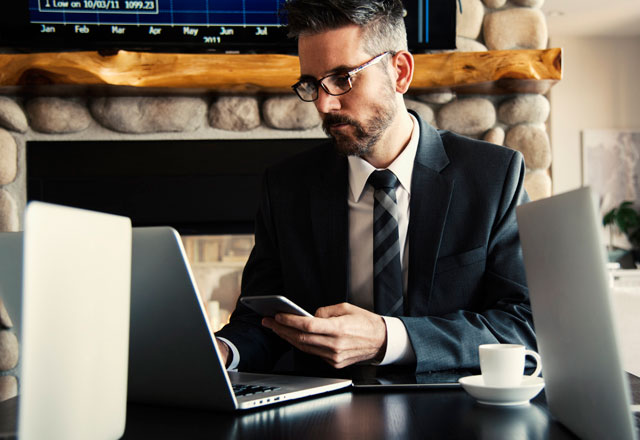